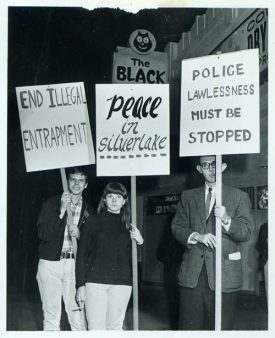 was a gay bar at 3909 W Sunset Boulevard in Los Angeles (which, according to my Google maps, is now a restaurant called Black Cat so that’s awesome). It had been around for about five minutes before it got raided by the LAPD. I mean, it was established in November of 1966 and on January 1 of 1967, a bunch of plain-clothes police officers entered the club. Not actually surprisingly, there were people in the bar celebrating the new year by kissing. I know, le gasp, right? The police responded by beating some of the partiers in the bar and arrested fourteen people for “public lewdness”. One of the bar’s patrons was repeatedly hit over the head with a pool cue — this was textbook police brutality.

And so there was a riot. Not like a Stonewall sized riot that lasted days and had hundreds and hundreds of rioters, but big enough that it spread into the bar across the street and the police beat up two of the bartenders there as well. The riot did dissipate, but instead of just going away, the LGBTQ+ community of Los Angeles came together and organized a protest. Saturday, February 11, 1967 they had simultaneous protests all across L.A. These protests, of course, were met with armed police but managed to stay peaceful. The demonstrations were organized by a group called PRIDE — Personal Rights In Defense and Education. After these events, PRIDE set up a newspaper called The Advocate — if that name sounds familiar, that’s because that’s the same The Advocate that’s still around publishing articles for the LGBTQ+ community today. This riot was also part of the inspiration for the founding of the Metropolitan Community Church, who have actually been a huge, influential part of our queer history since 1968.