Today’s the day, everyone! Fifty years since the first night of the Stonewall uprising! Deciding what to write today was difficult, but I finally decided…. this is a pretty momentous occasion, especially for a queer history web site. So I’m going to talk about what sets Stonewall apart, and what lessons we learned 50 years ago that we can still be carrying with us today. 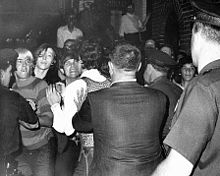 People always like to say that Stonewall was the start of the gay rights movement but if you’ve been following us for a while, you know that’s not strictly true. There had been organizations like the Mattachine Society and the Daughters of Bilitis fighting for gay rights for decades. We’d already had riots like Compton’s Cafeteria, the Black Cat Riot, and Cooper’s Do-nuts, we’d already had protests like the Annual Reminders and the Dewey’s Sit-In. The gay rights movement was pretty well in effect by 1969.

So what made Stonewall so important? Why is that the moment that changed everything? Because that’s the first time we stood up against the people oppressing us together. The LGBTQIA+ community, even now, is rife with division and it was then too. The divisions were different, but they were there. The community was broken up into the “butch” gays — the “respectable” straight-passing men who could blend into mainstream society; the queens — basically any more effeminate gay men could fit into this group which was also divided up by drag queens, transvestites (who, now, we’d mostly call transgender women), street queens, and “scare queens.” There were similar divisions between lesbians — butch and femme, passing or not. And in all of those groups, of course, there was a division between the white people and the people of color.

But on June 28, 1969 none of those divisions in the queer community mattered. The divisions were still there, but it didn’t matter. We had each other’s back. Stonewall was mostly full of butch gays — and mostly white gays at that, and the police were letting most people who weren’t in the “wrong clothes for their sex” go free — but they didn’t leave, they stayed outside and watched and drew in a crowd. The street queens weren’t in the bar at all, they would have been fine — but they were the ones who started fighting back. Because — for maybe the first time ever — it wasn’t only about self-preservation. And for five nights of rioting, we all had each other’s backs. That’s what changed — that’s why we’re able to look at Stonewall as the beginning of something.

To me, that’s why Stonewall was so powerful and important. It showed that, as long as we are looking out for each other and working together, that there’s nothing we can’t accomplish.

We’re not yet at the bright future every single one of the heroes of Stonewall we’ve talked about this month — and all of the ones we haven’t talked about yet — had envisioned for us. But I can promise, that is how we’ll get there. Working together, as a community.

I know this was like hokey and sappy or whatever, but it’s over now. Go celebrate! 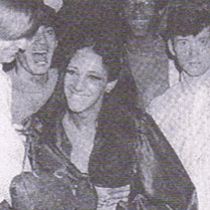 Gay nightlife in 1969 was something quite different from what it is today for a couple of reasons. One of those reasons was that they tended to be owned by organized crime families, rather than by actual queer people. While this didn’t usually work out in the favor of the customers, it was just fine with Tammy Novak.

Tammy Novak was 18 years old in 1969, and was living — as far as I can tell — fully transitioned into life as a woman. Typically, a transvestite (the popular word of the time) would only be allowed into a place like Stonewall Inn if they were wearing at least four articles of “gender appropriate” clothing — the minimum allowed by law. The idea was that by making sure everyone was “gender appropriate” it would minimize police attention (and that worked out so well, clearly…)

But Novak had lived with Fat Tony of the Genovese crime family — the owners of Stonewall Inn — and so she was allowed to come and go as she pleased, no matter what she was wearing. She was also friendly with Chuck Shasheen, who ran the bar.

It was because of these connections that Tammy was in the bar when it was raided by the police on June 28, 1969 — and she immediately caught the attention of the police. There’s some (kind of unreliable) eyewitness testimonies that Tammy was on a lot of drugs that night, and seemed not to realize what was going on until the shouting outside of the bar snapped her out of it. She was almost in the police wagon (that drag queens were being loaded into) at this point, but turned and swung at the police — she made an escape attempt.

This — like so many other moments — was claimed by some to be the moment that sparked the riots, but with the shouting being a pretty key part of the story, my guess is this was happening just after or around the same time that Stormé Delarverie was being arrested. During the confusion that followed, Tammy made her escape. She took refuge in the apartment of drag performer Joe Tish.

There doesn’t appear to be any record of what happened to Tammy after the riots. This is partially because she wasn’t the only Tammy Novak in New York in 1969 — the other Tammy Novak was a performer at a place called 82 Club, and was not involved in the riots in any way, but it does make it more confusing when you’re trying to find out what happened to this Tammy Novak.