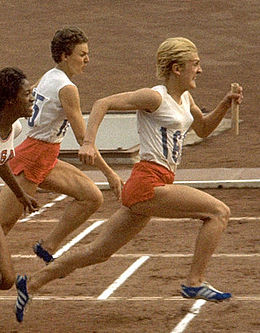 In more recent years, many governments and organizations have worked to undo the injustice that’s been committed against LGBTQIA+ people throughout history — pardoning those convicted of homosexuality or cross-dressing when those were crimes, writing obituaries for notable queer people in history, etc. But there’s some glaring instances where an injustice clearly could and should be rectified — but no justice has been forthcoming. One egregious example of this is that of Ewa Kłobukowska.

Ewa Kłobukowska was born on October 1, 1946 into a family of intellectuals in Warsaw, Poland. She grew to become an incredible athlete, competing as a sprinter in the Olympics in 1964. She won a gold medal in the 4×100 meter relay with a time of 43.6 seconds — breaking the world record she had set only a month before with a time of 44.2 seconds, as well as earning a bronze medal in the 100 m sprint.

The following year, she graduated from the Technical School of Economics No. 6 and set a new world record for 100 m sprint, with a time of 11.1 seconds. In 1966, she competed in the European Championships and — although she didn’t set any new world records, she still managed to earn a two gold medals and one silver medal. Not bad, right?

In 1967, Ewa took a traditional gender verification test for the European Cup track and field competition in Kiev, administered by the International Association of Athletics Federations (IAAF). She failed the test — Ewa had an intersex condition that even she was wholly unaware of. The Polish Federation decided to send Ewa to compete anyways — which the IAAF did not appreciate. In response, they publicly announced that Ewa had “one chromosome too many.” A medical journal published her results — a chromosome makeup of XX/XXY. Ewa was labeled as a “hermaphrodite” in the media. She disappeared from sports completely.

In 1968, instead of competing in the Olympics, Ewa got pregnant and had a son. I guess that’s a pretty worthwhile use of the time. Meanwhile, also in 1968, the standard gender verification test that was previously used was abandoned in favor of the “Barr Body Test” — a gender verification test that, incidentally, Ewa would have passed. (This starts getting into like genetics and science stuff I don’t really understand so I can’t explain really why she would have passed, but she would have.) That’s right, if she’d been tested just one year later all of the humiliation she suffered — and would continue to suffer — would have been avoided.

But that didn’t stop the IAAF from erasing all of her world records in 1969. They allowed the Polish team to keep the medals she had helped them earn in the relays. How gracious, right? Ewa has done her best to stay out of the public eye since then, though she graduated from the Warsaw School of Economics in 1972. Gender verification tests were abolished in sports altogether 1999.

She’s still alive and kicking at 72 years old. And yet, Ewa’s records still have not been restored to the record books. At this point, it doesn’t seem that there’s any reason they shouldn’t be.