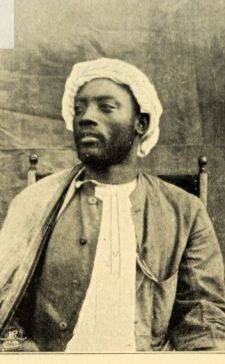 Danieri Basammula-Ekkere Mwanga II Mukasa (Mwanga II for short) was born in 1868. His father was Muteesa I, the kabaka (or king, basically) of Buganda from 1856 until 1884. On October 18, 1884 Mwanga II became the 31st kabaka of Buganda (part of present-day Uganda). He was sixteen years old — and his reign was not at an easy time. Muteesa I had staved off the “invasion” of Christianity and Islam by playing members of three factions against each other — Catholics, Protestants, and Muslims. Mwanga II did not have the political finesse to keep that going for long after he came to power, and he was quite certain that these “invading” religions were the greatest threat facing his nation. Mwanga decided a more aggressive tactic was needed. British missionary Alexander Mackay, who quite liked the situation under Muteesa, did not like the changes under Mwanga and unfortunately, he’s the main source for the information I have on Mwanga’s reign — so, y’know, keep in mind that this is largely coming from a heavily biased source that definitely did include some absolutely false claims (like that Mwanga learned homosexuality from Muslims traders from Zanzibar — yeah, that didn’t happen).

Within his first year of ruling, Mwanga had ten Christians executed. Following that he had the archbishop James Hannington as he arrived at the kingdom on October 29, 1885. Like that old saying goes, “If you can’t stall them, have them die in mysterious circumstances near your kingdom’s border and hope no one traces it back to you.” (They did trace it back. Oops.) I should probably point out, for the sake of fairness, Hannington’s route took him through a particularly tumultuous area of Buganda’s borders and Mackay himself tried to warn him against going that way. Didn’t stop Mwanga from getting blamed.

To make things worse, Mwanga’s harem (which consisted of both men and women) had been infiltrated by these new religious ideas and they were superceding old traditions. In the old traditions of Buganda, the kabaka was THE authority. You couldn’t tell a kabaka “no” about basically anything. (It’s good to be the king, y’know?) So when Mwanga wanted to sleep with some of the boys in his harem — which was, according to Bugandan tradition, absolutely within his rights — and they told him no because it conflicted with what they were being taught about their new faith (that men had to lie with women), he was infuriated. He also discovered one of those pages teaching Christianity to his “favourite and so far always compliant toy” Muwafi. (I mentioned that a lot of this comes from biased sources, right? So like, take that quote with a grain of salt.). Fearing the Christian missionaries were turning his courtiers into spies, he decided the only appropriate action was to execute every practicing Christian in his court. All told, it’s estimated there were 30 people he executed between January 31, 1885 and January 27, 1887 (including the boys in his harem that refused him). Twenty-two of them were burned alive, and would later become known as the Uganda Martyrs — officially sainted on October 18 of 1964 by Pope Paul VI. One of them, named Kitzito, was only 14 years old making him the youngest saint in history.

In terms of public opinion, the executions backfired on Mwanga on a massive, international scale. They riled up a lot of powerful people — particularly in the British Empire — who decided to back a rebellion to depose Mwanga II and replace him with his older brother Kiweewa. This decision was met with widespread popular support from the British people. The rebellion succeeded in 1888 — although Mwanga escaped — and Kiweewa became kabaka — for forty days. A band of Muslims deposed Kiweewa and put his half-brother Kalema on the throne. Kalema lasted a little bit longer — but Mwanga was nothing if not stubborn. He made a deal with the British to give up some of Buganda’s sovereignty if they’d help him get his throne back. So they did – and he was back on his throne by the end of 1889 and in a formal treaty with the British by December 26, 1890.

In many ways, this worked out well for Buganda — they were given a generous treaty (compared to other treaties in Africa), and the people of Buganda were allowed to administrate over the other areas that the British were including in the “Protectorate of Uganda.” They imposed their language, clothing, and diet on the rest of the protectorate. However, not everything was in their control; for instance, in 1894 the British imposed a ban on same-sex relations between men. I don’t really have any evidence to support this theory, but I think that might’ve been a contributing reason why in 1897, Mwanga decided he didn’t like being a British protectorate and declared war on Britain.

The war lasted from July 6 until July 20. The British soundly beat him, and he he was forced to flee into modern day Tanzania (German East Africa, at the time). Once there, he was arrested. He escaped, raised an army, attempted to take his throne back and was defeated again on January 15, 1898. This time he was exiled to the Seychelles (which, if you suck at geography like me and didn’t know, is 115 islands forming an archipelago in the Indian Ocean). Since he was stuck on an island, he did not go back to Buganda and actually even eventually converted to the Anglican Church before he died on May 8, 1903. In 1910 his remains were sent back to Uganda where they were interred in the Kasubi Tombs, where his father is buried.

So, okay, I hear you. What’s the big deal about Mwanga? Consider this: in Africa, 36 countries — including Uganda — have criminalized homosexuality. All of them established those laws after being colonized by Europeans. And most of them currently justify those laws by saying that homosexuality isn’t part of their culture, that it was brought to them by Europeans. Aside from some really old, kinda kinky rock art, Mwanga II is some of the best proof against that claim. Also, is it just me or could Chadwick Boseman totally play him in a movie?

Help me bring you more!