Sometimes called “the Rosa Parks of the gay community,” Stormé DeLarverie was a butch lesbian who’s arrest is often credited as the moment that sparked the Stonewall Riots — despite being quite adamant that “it was a rebellion, it was an uprising, it was a civil rights disobedience – it wasn’t no damn riot.”

DeLarverie was born in 1920 to a white man and a black woman — who worked as a servant for her father’s family. DeLarverie’s exact date of birth was never exactly known, so she celebrated it on December 24. (I’m not sure why you’d pick that if you’re given a choice, but I guess we can’t all have June birthdays…) As a kid, DeLarverie was bullied constantly. In her teenage years, she joined the circus — getting a job riding jumping horses for Ringling Brothers Circus, until she was injured in a fall and was unable to resume the work.

DeLarverie realized she was a lesbian around the age of 18. She entered into a relationship with a dancer named Diana, who she was with for about 25 years until Diana’s death in the ’70s. DeLarverie carried a photo of Diana with her for the rest of her life. 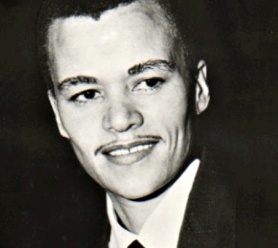 In 1955, began touring as the MC and the only drag king in the Jewel Box Revue — the first racially integrated drag show, appearing regularly at the Apollo Theater. Audience members would attempt to “guess the girl,” ultimately being surprised during a song entitled “Surprise with a Song” that the girl was actually DeLarverie, who was often sporting a mustache and a tailored suit.  DeLarverie was noted particularly for having a strinkingly handsome appearance as a boy — which inspired a lot of other lesbians of the time to begin wearing traditionally masculine clothing as well. Her career as a performer would be explored in the 1987 documentary Stormé: The Lady of the Jewel Box.

DeLarverie continued performing with the Jewel Box Revue until 1969, becoming quite well known and influential in drag culture. 1969, however, was the year the most truly secured her place in queer history. DeLarverie was at the Stonewall Inn working as a bouncer when the police raid began in the early morning hours. Although resistance to the raid truly started inside the bar itself, the real riot on the street is often said to have begun with a woman many have identified as DeLarverie. She was brought out of the bar and through the crowd outside several times, but kept escaping — at least once by punching an officer (which she, according to friend Lisa Cannistraci, believed was the first punch of the riot.) At some point, DeLarverie was hit in the head by an officer’s baton and began to bleed from the wound — she struggled and complained that her handcuffs were too tight, before looking to the crowd and asking “Why don’t you guys do something?” At this point, the police officers picked up DeLarverie and hurled her into the back of the police wagon — and the crowd erupted. (It was at this moment that the legendary “first brick” was thrown.)

Now, it hasn’t been confirmed that DeLarverie was actually the woman that that story is about — but it has been absolutely confirmed that she was there and was one of several butch lesbians fighting against the police. In truth, it’s entirely likely that the above story did happen, and no one’s name but DeLarverie’s has ever been put forth for it, but there probably wasn’t just one inciting incident that sparked the riots — a number of things were happening simultaneously that cumulatively led to the uprising.

The riots transformed DeLarverie, who became a fierce activist and a protector of the LGBTQIA+ community afterwards. She had a state gun permit, and was known to patrol the neighborhoods around lesbian bars looking for intolerance or, as she described it, “ugliness” against her community. She was a regular staple at the Pride parades and rallies that followed after Stonewall, and also acted as a bouncer at several lesbian bars until she was 85 years old. Meanwhile, she also continued to perform, often putting on benefits for abused women and children and volunteered for queer organizations and charities as well.

She was also a well-respected member of the Stonewall Veterans Association, holding several offices there including Chief of Security and Ambassador. She also served as Vice President from 1998 to 2000.

In 2010, DeLarverie moved into a nursing home in Brooklyn. With dementia setting in, she did not know she was living in a nursing home but she retained her memories of the Stonewall Riots and her childhood. On June 7, 2012 Brooklyn Pride Inc. honored her at the Brooklyn Society for Ethical Culture, where they also aired the 1987 documentary about her. Two years later on April 24, the Brooklyn Community Pride Center honored DeLarverie “for her fearlessness and bravery.” One month — to the day — later, DeLarverie died in her Brooklyn nursing home from a heart attack at 94 years old.

DeLarverie led a long life, but her legacy with the LGBTQIA+ community will continue for many many years to come. Every time there is ugliness against this community, I hope you hear her asking that question that changed the course of history for queer people everywhere: “Why don’t you guys do something?”