Dung Hà was an infamous Vietnamese gangster (whose real name was Vũ Thị Hoàng Dung) who reached the peak of her influence during the ’90s.

She was born in 1965 in Hai Phong, North Vietnam. The part of the city in which she lived was a bustling urban area, where she regularly witnessed crimes — some of which were committed by her numerous older brothers and sisters. Apparently, this inspired her. She dropped out of school at a young age and became a career criminal. She started small, with pickpocketing and robbery.

In 1986, Dung Hà was caught robbing a pedestrian and arrested. She spent twelve months in prison, but resumed her illicit activities as soon as she was released. If anything, going to jail made her more involved in crime. She started having a romantic affair with a local crime boss — Hùng Chim Chich (“the Warbler”) Their love story — if you want to call it that — became relatively famous but he started losing money and influence due to a drug addiction. Dung Hà took over his casino businesses, and left him before he died from AIDS-related complications.

When she was 26, she began a relationship with another area crime boss named Hùng Cốm. (I guess she kind of had a type — local crime bosses named Hùng who had more influence than she did.) Hùng Cốm was basically the scariest crime boss around Hai Phong at the time, and rumors said he could not be defeated. The two went on a massive crime spree together and also opened a handful of casinos.

And then Hùng Cốm got arrested. Dung Hà orchestrated an elaborate scheme to free him and help him get to a train that would take him to Hong Kong. She convinced several of his followers to help her, and had agreed to let another convict named An Dong out of prison if he helped as well. She bribed some of the prison guards so that they would let her bring her lover a “farewell gift” — the guards didn’t realize that gift was actually a bunch of grenades. (I mean, what else do you get a crime lord on a special occasion?) Though that part worked, the rest of the plan rapidly fell apart — the gates were too tightly guarded, the grenades turned out to be duds, and An Dong was shot to death in the escape attempt.

Though the plan failed miserably and Hùng Cốm ultimately hung himself rather than face execution — but it had managed to earn Dung Hà a great deal of respect nevertheless. She became, essentially, the queen of crime in northern Vietnam — establishing a rivalry with Năm Cam who ran a criminal empire in the southern half of the country. 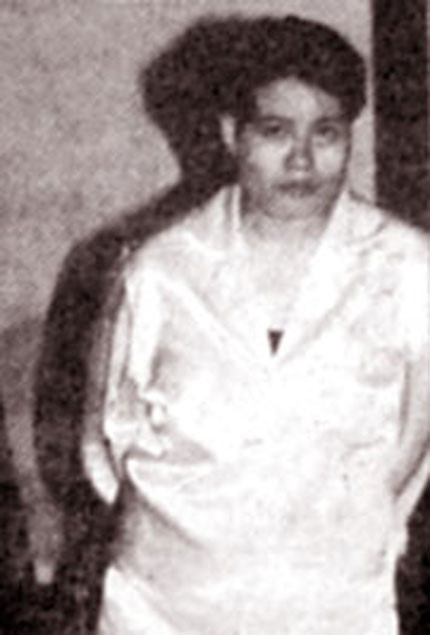 Now, according to total hearsay, after the death of her lover Dung Hà was incapable of ever loving another man and that is why her next love affair was with a woman. That smells like fairly standard bi-erasure to me but I suppose that’s just an opinion. Anyways, Dung Hà cut her hair extremely short and was frequently seen with a beautiful, dark-haired girl who was taller than her and was extremely affectionate towards her. The woman was named Phuong but I cannot find much more about her except that she came from a nice family. She ditched our intrepid queer crime boss when Dung Hà got arrested in 1995. Phuong was, as far as I can find, the last romance of Dung Hà’s life.

Though she was sentenced to seven years in prison, she was released after only three years. Unfortunately, she was under intense police scrutiny and her criminal activities — and therefore her profits — suffered as a result. So Dung Hà decided to pack up and relocate….

….to Saigon, in the southern half of the country. Now, shortly before this, another gangster called Hải Bánh had moved south and joined forces with Năm Cam and he was all about that. He was hoping to get Dung Hà to help him expand his casino business. Unfortunately, Dung Hà had gotten pretty used to being her own boss — and, like, that’s the dream, right? So she was not giving that up. She started a new gang and began intentionally disrupting Năm Cam’s businesses — particularly his casinos.

On September 9, 2000 this new gang interrupted a business run by Hải Bánh — throwing shrimp sauce, snakes, and human feces into the middle of a dance floor. Hải Bánh was furious, and Năm Cam had had enough. Less than a month later, hired guns found Dung Hà and shot her in the head at point blank range.

But Dung Hà would end up with the last laugh — her murder led to increased scrutiny against both Năm Cam and Hải Bánh and would ultimately lead to the collapse of both their criminal organizations. Năm Cam, among several others, was given the death penalty for his involvement in her death. Meanwhile, Dung Hà’s body was brought back to Hai Phong where a truly massive funeral was held in her honor and her ex-girlfriend Phuong is reported to have been seen weeping at the event (as if they hadn’t been broken up for five years at this point but what do I know?)

So that’s the story of Vietnam’s “lesbian” gangster. I wouldn’t call her a queer hero, but she sure makes for a fun story!

Help me bring you more!