I have talked a little bit about how well-respected LGBT+ people seemed to be in the ancient world (outside of the Assyrian Empire) but by the 18th century, that was absolutely not the case. Homosexuality was not explicitly illegal in *every* country, but those that had not adopted those laws were about to. 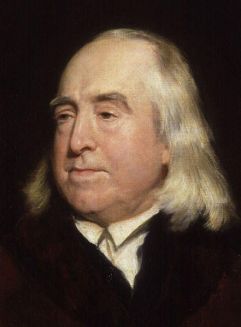 Enter Jeremy Bentham — a radical social reformer, a philosopher who is considered the father of utilitarianism, and one of the first people in Europe to ever write down an argument that homosexual acts shouldn’t be criminal offenses. Bentham was born on February 15, 1748 CE.

He was way ahead of his time. He believed in transparency — not just for the government but for everyone. (He would have loved social media.) He believed in equality for women. He is considered to be one of the earliest animal rights activists.

And, in 1785, he penned a paper called “Offences Against Oneself” which was, essentially, an argument that it made no sense to prohibit two consenting adults from any sexual act in the privacy of their own home — that the crime was victimless and therefore shouldn’t be a crime.

Unfortunately, Bentham didn’t publicly publish this essay for fear of offending the populace of England. The paper was first published in 1978 in the “Journal of Homosexuality”. Despite not publishing his paper, he would live to see a handful of countries decriminalize homosexuality — starting with the Kingdom of France in 1791. Bentham eventually died on June 6, 1832 at 84 years old.